Blue Cross and Blue Shield North Carolina to Cut Some Rates, Raise Others 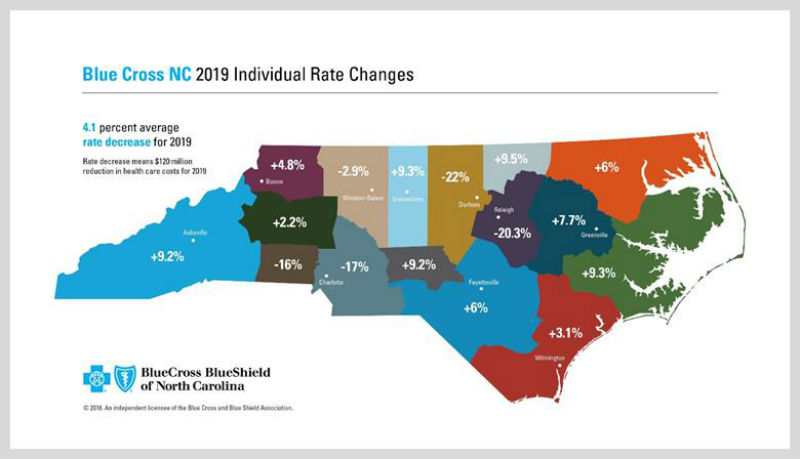 Blue Cross and Blue Shield of North Carolina recently announced that average premiums for Affordable Care Act plans would decline by 4.1 percent for 2019, but that some customers would see increases depending on the area where they lived. There are over 200,000 people who will see rate cuts. But who will see raises?

According to North Carolina Health News, the lucky members who will receive cuts reside in the state’s two largest urban areas: Charlotte and Raleigh.

“In the Triangle, those who stick with Blue Cross can expect average rate reductions of more than 21 percent. In Charlotte pre-subsidy premiums will decline by 17 percent; in nearby Gastonia, rates will drop 16 percent. About 40 percent of the roughly 475,000 people covered by Blue Cross ACA plans live in those regions.

The only other region that’s getting an ACA rate cut from Blue Cross is Forsyth County and five neighboring counties, where rates will decline 2.9 percent.

Across the rest of the state — in larger cities such as Asheville, Fayetteville, Greensboro and Wilmington — as well as in many rural communities, Blue Cross ACA rates will rise.”

This isn’t just based on random luck. The urban areas of N.C. have a competitive advantage that the rural areas do not have, with less incentives to lower rates. In the Triangle area, the insurance company works with a network of UNC Health Care affiliated doctors, clinics and hospitals called the UNC Health Alliance that have agreed to share financial risk, resulting in a rate cut of a $1,680 pre-subsidy annual. Blue Cross agreed to make UNC Health Alliance the sole provider for its ACA plan members in the Triangle.

In the Charlotte area, residents have four health systems to choose from: UNC, Atrium (formerly Carolinas Healthcare System), Novant, and the Gastonia-based CaroMont, resulting in rate reductions by contracts through Blue Cross and the providers that tie healthcare and financial outcomes together. Rural communities do not have the competitive infrastructure that larger urban areas have to negotiate lower rates.

The News & Observer notes that Blue Cross is the only insurer that will offer ACA plans in all 100 counties. These percentages are averages, and individual and family plans may still see larger decreases or increases in 2019.

“The plans differ in pricing based on the way their benefits are structured, so that plans with higher annual deductibles tend to have lower monthly premiums. And the plans are priced specifically in each of North Carolina’s 16 rating areas, which effectively function as their own health insurance markets governed by local economic forces and medical pricing trends.

Last week Blue Cross announced that it is asking the N.C. Department of Insurance for a statewide average rate cut of 4.1 percent, explaining that it was able to sign lower-cost reimbursement contracts with hospitals and other providers across the state.

… In North Carolina, about 500,000 are covered by ACA plans, and about 90 percent of them qualify for federal subsidies to offset their premium costs, and in some cases, their deductibles and copays.”

While competitive lower rates are a move in the right direction for Blue Cross, the positive outcome of lower rates should be something all N.C. residents look forward to in the upcoming year. There are still many communities facing extremely high health insurance costs. We need to keep fighting the fight, until affordable healthcare is available to all North Carolina citizens, no matter where they live.