ECU’s Impact on Healthcare in NC 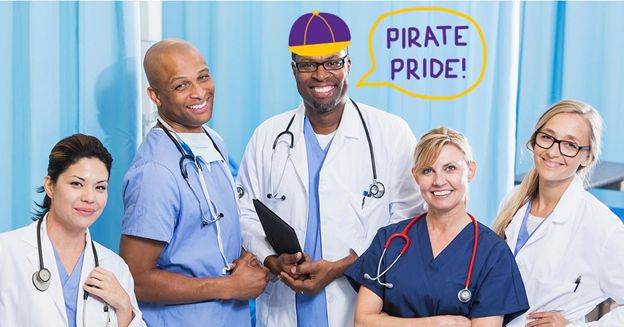 Did you know that one out of five doctors in North Carolina is a graduate of the Brody School of Medicine at East Carolina University? Talk about Pirate Pride!

This year marks 40 years since the first class of 28 fledgling doctors graduated from what was then called ECU School of Medicine. (Happy Anniversary!) It was renamed in 1999 and now admits 80 students per year. Brody offers programs in everything from anatomy and cell biology, to radiation oncology and obstetrics/gynecology, with dozens of others in between.

But enough background — here’s how the school is making an impact in North Carolina today.

The Brody School of Medicine is ranked as one of the top 10 institutions in the nation for preparing family doctors by the American Academy of Family Physicians. One in six family physicians in North Carolina is a Brody graduate. (Seems like those Pirates know how to command a medical ship.)

Another way ECU is making an impact on the healthcare community? By using technology and treatment together. ECU is a pioneer of telemedicine (i.e. virtual house calls) and leads the N.C. Statewide Telepsychiatry Program. The program aims to improve mental health in a cost efficient way by virtually linking psychiatric professionals and patients. (Screen time that matters!)

Brody graduates may chant “Purple and gold ‘til I’m dead and old!” at football games, but they’re living proof of what ECU is doing for the healthcare community — in both Eastern North Carolina and the state at-large.

Read on for some trivia you may not know about ECU’s Brody School of Medicine.

What’s next for ECU? Possibly a merger with Vidant Health. ECU Chancellor Cecil Staton said it would “advance the mission of delivering healthcare in rural, underserved areas” and be a step in the right direction. We’ll keep you posted on these negotiations as they move forward.

In the meantime, while healthcare access is incredibly important to both rural and suburban communities alike, it does no one any good if it’s unaffordable. Join us in fighting back against state-based mandates that drive up the cost of healthcare — for everyone.