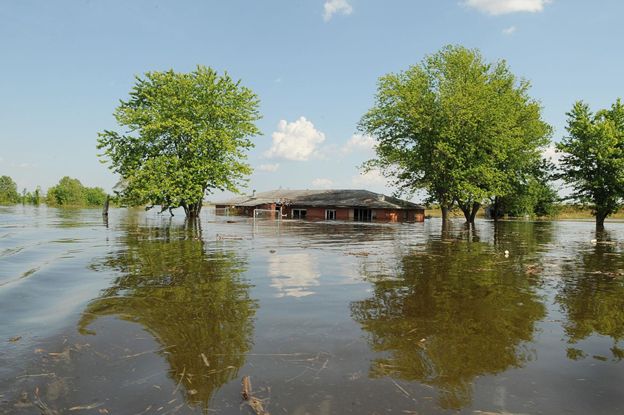 Hurricane Matthew was downgraded to a Category 2 storm by the time it hit the East Coast on October 8th, but it has had devastating consequences for North Carolina.

Record flooding of rivers like the Tar, Lumbee and Neuse swept through the southeastern part of the state, leaving towns like historic Princeville almost entirely underwater. In Kinston the floodwater was still rising a week after the storm, exceeding the high-water mark set during Hurricane Floyd in 1999. For rural towns already struggling with poverty and declining populations, the thought of rebuilding is daunting.

What’s more, Matthew was one seriously expensive storm. Its price tag countrywide is estimated at $4-6 billion, the bulk of it in Georgia, South Carolina and North Carolina. And the costs may rise even higher. As Forbes reports, some NC residents may find themselves paying new mandated flood coverage in future years if the storm changes flood hazard maps. (You can read more about the potential rate hikes here.)

The state is pulling together in ways large and small to try to help Matthew’s victims. (Even the IRS is jumping in!) Some ideas are pretty innovative; for instance, if you live anywhere near downtown Raleigh, check out Rally + Relief, an ongoing effort in which dozens of downtown businesses offer part of their proceeds to the North Carolina Community Foundation Statewide Disaster Relief Fund.

Our thoughts are with our fellow citizens struggling in Matthew’s aftermath, and we encourage you to find your own ways to help. Look around your community, and you’ll find churches, businesses, and even individuals who are committing resources and time to relief efforts. You can join them. To get you started, here are just a few organizations that could use your resources or your time:

The North Carolina Community Foundation (Specify in your donation notes that you’d like your contribution to go to Matthew relief efforts.)

The Carolina Center for Public Service (Campuses across the UNC System have similar initiatives.)

The Humane Society (Hundreds of thousands of animals were affected by Matthew, including farm and domestic animals, and the Humane Society is continuing to try to rescue as many as possible.)