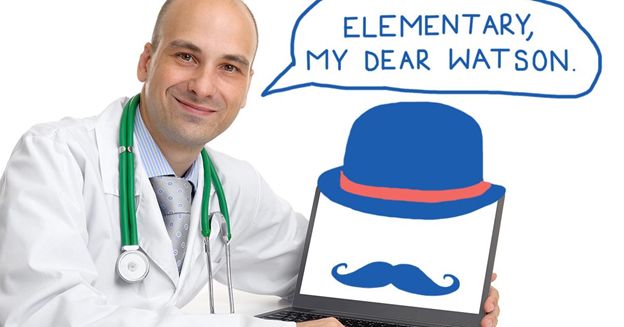 If you’re a Jeopardy! fan you probably remember the moment when the IBM Watson supercomputer beat two former (human) winners in 2011 for a $1 million prize.

Watson, named after IBM’s first CEO, is an AI. That’s short for ‘artificial intelligence’ - basically, a machine that thinks.

Check this: in order to match or exceed a super-smart human’s ability to answer questions, Watson retrieves data from over 200 million pages of information across 90 servers. It then processes this information against six million “logic rules.” (Oh, and by the way, Watson and his “data store houses” take up as much room as 10 refrigerators.)

Watson is proficient at digesting information and quickly answering questions — not unlike Sherlock Holmes’ mystery-solving comrade of the same name. While this Watson may lack a bowler hat and a mustache, the supercomputer is proving that it has a style all its own, specifically when it comes to healthcare.

Watson processes medical information from medical images, journals and textbooks, and insurance claims, analyzes patient information, and then pinpoints treatment-specific solutions based on its findings.

Let’s take medical images for instance. When IBM bought Merge Healthcare in 2015, it acquired 30 billion medical images that belonged to Merge. The images provide Watson with a source of data to pull from when doctors are diagnosing diseases like melanoma, using it to draw comparisons and spot patterns. In other words, Watson will help diagnose you.

It’s also helping to figure out some aliments. IBM and Boston Children’s Hospital used Watson to help identify, diagnose, and treat certain diseases. IBM and India’s Manipal Hospital also teamed up to use Watson to treat cancer patients. In places like India, this technology has become vital. The machine can fill in the doctor gaps so more patients can be correctly treated.

Last, but certainly not least, it’s taking information from an individual’s genetic profile and offering personalized treatment options. Cancer centers are using Watson to translate a patient’s DNA into a usable genetic profile. Combined with relevant medical information, this allows doctors to provide patients with the most personalized treatment options.

How Do You Feel About All This?

While all of this is pretty cool (technology is the face of the future), we’ve seen enough fantasy films on AI to know that some people will be worried about both their privacy and a machine’s limitations.

Don’t worry. IBM has promised that protected health information is not stored and researchers are provided with a HIPAA-enabled cloud platform for storing and aggregating PHI data.

Whether you think Watson’s capabilities are scarily cool, or just cold and scary, one thing is for sure — he’s just getting started.

Fancy technology does us no good if people don’t have access to it due to the high costs of healthcare. Help us drive down costs by fighting against state-based mandates that raise the price for your family’s doctor visits.