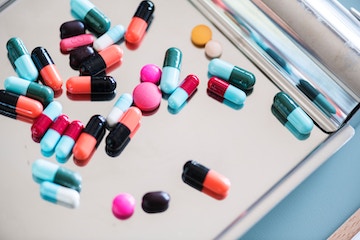 PhRMA, the gang that lobbies for the pharmaceutical industry nationally, has a heavily promoted website in which they want to talk to us about cost.

This is very much in the wheelhouse of the Coalition, so sure! Let’s talk.

It looks like maybe they don’t want to talk to us so much as confuse us. There’s a lot going on in these few sentences, so let’s take it piece by piece.

It looks like maybe they don’t want to talk to us so much as confuse us. There’s a lot going on in these few sentences, so let’s take it piece by piece.

1. “While biopharmaceutical companies set the list price for a brand medicine…”

This should be the beginning and the end of the conversation, right?

Take Firdapse, a drug that had, until recently, been made available for free. The company that now owns it, Catalyst Pharmaceuticals, changed the list price to $375,000. There are no regulations whatsoever on how pharmaceutical companies can adjust their list price.

2. “…more than one third is rebated back to payers and the supply chain.”

A one-third discount might sound great, but let’s take a closer look at Firdapse. If you are totally happy to pay $375,000, then I’m sure receiving a $125,000 “rebate” is nice surprise. However, wouldn’t it be even better to start the price at something reasonable – maybe $12,000 (that would be twice the highest estimated cost of formulation of the drug, which one would think is still a nice profit for Catalyst) and receive no rebate?

3. “Insurers negotiate large rebates, but do not share these discounts with patients who pay a deductible or coinsurance”

Is this true? A quick Google search can show anyone that no, this simply isn’t accurate, even in North Carolina.

Even insurers that don’t pass along the rebates directly do so by using the rebates to control premiums for everyone. This is in part due to a regulation known as the 80/20 rule, which ensures that at least 80% of premiums paid go towards “medical care and efforts to improve the quality of care.”

In fact, insurers spend on average of ~86.5% of premiums on medical care – 6.5% more than they are legally required – and associated taxes, of which pharmaceutical costs occupy the highest share.

The remaining 13.5% is used to pay administrative costs. On average insurers keep 2.3% of premiums as profits.

Guess whose profits are not regulated? Pharmaceutical firms.

4. “Ultimately your insurer determines what you pay for your medicine out of pocket.”

“Ultimate” is defined as “last in a progression or series” so yeah, sure, at the end of the line your insurer is the one who has to break the bad news to you about the exorbitant price that the pharmaceuticals set.

“Out of pocket” means the money the patient pays separate from their premiums… but obfuscates the fact that the high price of drugs also raises your premiums.