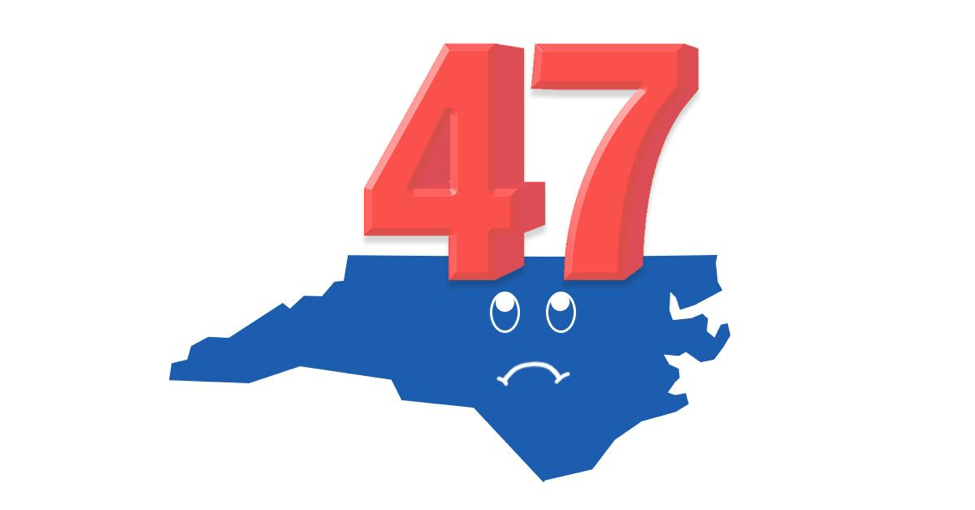 Did you know that North Carolina is ranked as one of the worst states for healthcare?

In fact, a recent WalletHub analysis ranked North Carolina number 47 out of all 50 states (plus the District of Columbia) when it comes to healthcare. The analysis was based on 35 measures of cost, accessibility, and outcome.

So, what gives, North Carolina?!

Let’s break it down.

North Carolina has one of the highest insurance premiums in the country.

Insurance premiums are dictated by a number of factors, but chief among them are how much healthcare costs and how many people are consuming healthcare. To set premiums, insurance companies review medical and claim trends to predict how much it will cost to pay customers’ doctor bills. That can be tricky business.

For example, premiums under the Affordable Care Act, i.e. Obamacare, rose and continue to rise faster in North Carolina when compared to other states. After the “marketplace” opened, insurers had to estimate the healthcare needs of an unknown population of new customers and sometimes their predictions were off. Some critics argue that North Carolina would have been better off creating a state-based marketplace rather than using the federal one, while others argue that there should be more competition in the marketplace since most insurers chose to leave the ACA market in North Carolina because of its unpredictability and expense.

North Carolina also has one of the largest rural populations in the U.S. (Healthcare costs are higher in rural areas where there are usually fewer hospitals. Urban areas, with more competition among hospitals, often have lower healthcare costs.)

But, that wasn’t the case for a healthcare system in Charlotte, the largest city in North Carolina and one of the largest metropolitan cities on the entire East Coast. Last year, Carolinas Healthcare System came under fire for prohibiting insurance companies from incentivizing their policyholders (aka you, the customer) from seeking care at competing facilities that provided services at a lower cost. Governor Roy Cooper (who was the Attorney General at the time) and the Department of Justice filed a lawsuit against the healthcare system for illegal “steering.”

Healthcare costs are complicated, but these are just a few reasons why costs are driving up premiums in the Tar Heel state.

North Carolina’s comparatively large rural areas are more prone to healthcare barriers due to a lack of access. These areas typically have fewer doctors and lower income rates, which makes it harder for people to get healthcare. It’s hard to schedule a doctor’s appointment if there isn’t a doctor within driving distance or to pay for a hospital visit with money you don’t have.

“Income is directly related to health,” said The North Carolina Rural Health Action Plan by the North Carolina Institute of Medicine. “Increased income corresponds to better health outcomes, with the greatest impact on health for those with lower incomes. A person’s income or wealth is generally a proxy for their social conditions and community and economic opportunities. It is these factors more generally, rather than money specifically, that impact health.”

As more rural hospitals close in North Carolina (there have been four closures since 2010, including one in Franklin County in 2015) the concern over access only grows.

As for “outcomes,” this refers to things like infant mortality rate, overall life expectancy, heart disease rate, the share of adults with Type 2 diabetes, the share of at-risk adults with no routine doctor visits in the past two years, and more.

Again — there are many reasons for all of this, but to save you some scrolling, we’ll bullet a few contributing factors as to why health outcomes may be poorer and healthcare costs are higher in our state:

To be clear, “outcome” refers to the health outcomes of our state’s population and is not necessarily indicative of the type of care available or “bad” treatment. (North Carolina actually has some of the best healthcare systems in America! Think Duke Health, UNC Health Care, and Carolinas Health System to name a few.)

So, what do we do about all of this?

We’re glad you asked. North Carolina is a great state and a great place to call home. While healthcare is complicated and many are doing their best to make it more affordable and accessible, we can do better than number 47.

We care about your physical and fiscal health around here and lowering healthcare costs is what we’re all about. One way to do that is by rolling back state-based mandates that drive up the prices of health insurance for everyone.

Want to help? Join the Coalition and learn more about the issues of cost and accessibility and how you can be a smarter consumer of healthcare.