North Carolina Must Do More for Our Veterans’ Mental Health 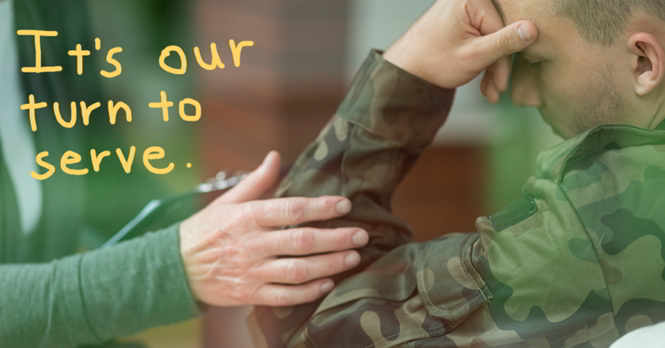 As part of our observance of Suicide Prevention Awareness Month, we’re talking about mental health and North Carolina’s veterans. We should start with some statistics: North Carolina is home to one of the largest active duty military populations in the US. When veterans, spouses, surviving spouses, and dependents are taken into account, over a third of North Carolinians have a connection to the military. Each branch of the military is represented in our state, and more than 100,000 of our children are military dependents.

North Carolinians are tremendously proud of our veterans. But sometimes we’re unaware of their issues - particularly around mental health. And that means we can’t support them the way they deserve.

As you may have heard in recent news, our country has a widespread problem with mental healthcare access for our veterans. The American Psychological Association found that 20% of veterans returning from Iraq and Afghanistan suffer from mental health issues. Other studies put that number closer to a third. An alarming — and growing — percentage of them also have substance abuse issues. The majority of mentally ill vets either do not seek or fail to receive professional help.

These problems often start during their military service. Physical injuries, particularly traumatic brain injury (TBI), contribute to lasting cognitive and emotional issues. Likewise, physical disabilities - the loss of mobility or a limb, blindness, etc. - can lead to mental health challenges. Between 10 and 20% of veterans deal with Post-Traumatic Stress Disorder (PTSD), which can be difficult to detect and may cause problems with mood, personality, and behavioral changes, and nightmares or flashbacks months or years later. As Humans of New York puts it, when a soldier comes home, his or her nervous system might not.

The impact is measurable and unacceptable: tens of thousands of veterans are homeless, many due to mental health or drug/alcohol issues. Currently, 20 veterans a day commit suicide.

The numbers don’t lie. We may be proud of our veterans, but as a nation we’re not doing everything we can to show them how proud we are.

The situation at home

Bringing the issue home to North Carolina doesn’t make it look any rosier. The services available in our state are not equal to the problem at hand.

We lack appropriate facilities. All of North Carolina’s major VA hospitals are struggling with their patient loads. In 2014, the VA hospital in Durham had the longest wait time new patient appointments (104 days) of any VA facility in the country, and the seventh-worst wait time for specialty care appointments (69 days).

The local and state facilities we have aren’t performing much better. A report by the North Carolina Institute of Medicine’s Task Force on Behavioral Health Services for the Military and Their Families found that an abysmally small number of veterans received services through local management agencies for mental or behavioral health issues. According to the NCIM, part of the issue stems from the uneven availability of services.

The need for such services in North Carolina is clear from the chilling numbers the Task Force presents: 19% of returning NC veterans are dealing with a traumatic brain injury (TBI). Somewhere between 12% and 25% struggle with PTSD. And a heartbreaking 20% to 45% are in the grips of a substance abuse problem. Untreated, the end results are both tragic and tangible; North Carolina’s veterans have a suicide rate 1.5 times the state average.

Our veterans help shape our state’s economic success. A study released by the National Conference of State Legislators found that veterans contributed to 10% of our state’s economy, with $48 billion in gross state product supporting 540,000 jobs. North Carolina is also home to 84,000 veteran owned businesses. We need our veterans to be in peak health, not just for moral reasons, but for economic ones.

In every way—social, political, financial—our treatment of veterans both reflects our values and affects the quality of life for our state as a whole. Addressing veterans’ mental health issues is both a moral obligation and solid fiscal planning. They served us, and it’s time we took care of them.

To learn more about veterans' issues and North Carolina’s fiscal health, join the conversation at www.fiscalhealthnc.com.