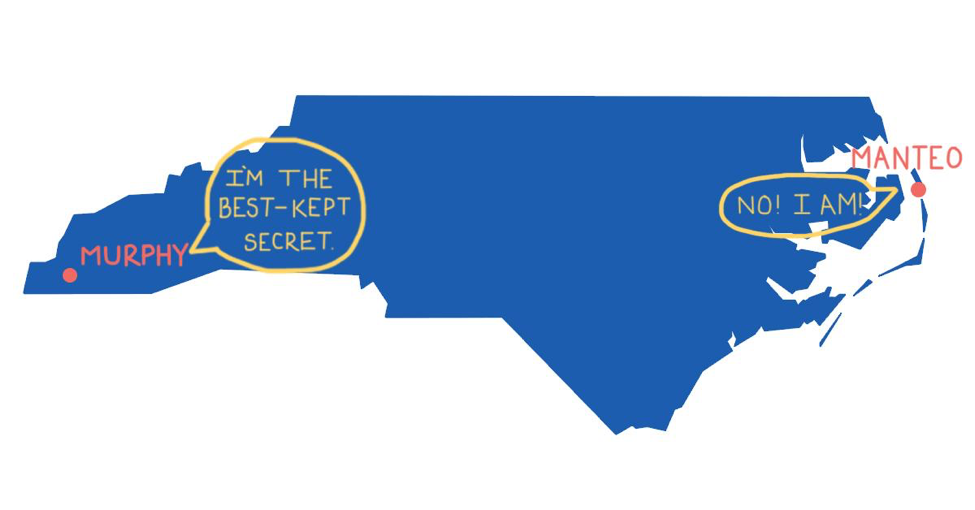 Whether you’re a North Carolina resident or an out-of-towner, chances are you’ve heard of Charlotte — the state’s most populous city. You’ve probably heard of Raleigh too. (Shout out to fifth grade flashcards!)

But what about Bethania or Tryon? North Carolina is full of lesser-known towns with rich histories, scenic landscapes, and quaint vibes. In fact, North Carolina is home to the second largest number of small towns in America, after Pennsylvania!

Here are seven “secret” North Carolina towns that even lifetime locals may have yet to visit.

Brevard is nestled in the Blue Ridge Mountains right outside of Asheville. This picturesque town was voted one of the Top 20 Best Mountain Bike Towns in America by National Geographic. In addition to its outdoor adventures and national parks, it’s also big on music. The Brevard Music Center offers one of the country’s best summer training programs for talented musicians. The BMC’s festival lineup this summer is also pretty impressive — it includes a special 35th Anniversary tribute concert to Steven Spielberg’s “E.T. — The Extra Terrestrial.” (Cool!)

Manteo lies on the eastern side of Roanoke Island. (Roanoke Island is home to the first English settlement in the “New World” and is also known as the Lost Colony. If you haven’t read up on this real life mystery — you should!) You can feel the history of this town with every footstep you take along the boardwalk. Main attractions include the Roanoke Marshes Lighthouse, several parks, statues of figures of old, and events like its annual boat parade.

Tryon is hailed as “the friendliest town in the South.” Legendary soul singer Nina Simone sure felt the friendly vibes of her hometown — her community raised money for her to pursue her music career. (Back then Simone went by her given name — Eunice!) Another cool fact unrelated to pop culture is that Tryon lies in the heart of the Isothermal Belt. This means it experiences milder temperatures and longer farming seasons than surrounding cities.

If you’re looking for a getaway, look no further than the Hot Springs Resort and Spa. The health-giving properties of this resort’s hot mineral waters have been famous since 1778. It’s believed that Native American tribes first soaked their toes in Hot Springs’ “healing water.” You may really just leave this town with “a better state of mind.”

Saluda is “where the foothills end and the Blue Ridge begins.” The town is perched at the steepest railroad grade in the country. Fun fact: Saluda’s railway was the first in the U.S. to be built using convict labor on a large scale. Saluda is also big on seasons. In addition to the year-round hiking, ziplining, and outdoor recreation, each summer it hosts the annual Saluda Arts Festival and each winter it hosts its Hometown Christmas. (It really is a festive place!)

Murphy occupies what used to be Cherokee Indian Nation territory. Located in the Appalachian Mountains, Murphy is described as “resembling a Norman Rockwell painting.” The Hiwassee Lake is considered by many to be one of the most beautiful in the state. The town is also counting down to the next solar eclipse. (Literally. Murphy will have an event especially for it.)

Established in 1759, Bethania was a self-sufficient farming community for Moravian settlers. It is the only example of a European style “open field” agricultural village remaining in the state. Each September it hosts the Black Walnut Festival. Friends and families come out to celebrate the history of Bethania and enjoy arts, food, crafts, and music.

North Carolina is a great state to live, work and play in. What’s not-so-great is how much healthcare costs here and around the country. Rolling back state-based mandates that increase the cost of health insurance for everyone is one way to make North Carolina even better. Want to make this happen? Join us.