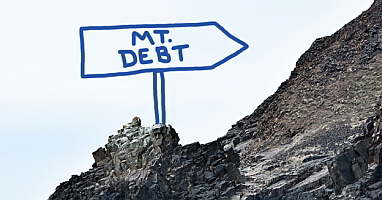 North Carolina college graduates are crushed under student loan debt. There’s just no other way to put it. According to the Institute for College Access and Success, 61% of our college grads carry debt...an average of $25,218 of it in 2014. That’s a 50% increase in just ten years.

The burden takes its toll. Young adults are putting their lives on hold in order to pay, delaying marriage, kids, home purchases, and — perhaps worst of all — retirement savings. This reality can negatively impact the broader economy. Even so, they’re still struggling; 60% of borrowers in a recent survey had trouble paying their loans. Trouble paying puts them further behind. Plus, most of the loan payment is only paying down the interest.

What Does This Have to Do with Fiscal Health?

Well, as the economic drivers of our nation’s future stagnate, our still-recovering economy stagnates — hurting us all and our fiscal health.

Debt also has to do with literal health. As in, accruing student debt is associated with worse health outcomes, including mental health outcomes, according not just to common sense but to actual science.

And also, since student debt and healthcare costs are both on the rise, it’s a double-whammy for the indebted population. Can you imagine having to choose between paying your debt or going to the doctor? You would put off preventive visits, right? Well...indebted graduates do, and what might have been small issues if caught early on snowball into expensive health problems that burden the system. (Think: unnecessary ER visits by people without general practitioners.) That means we all pay more.

This one might surprise you. It would seem logical that the student debt burden would be heaviest for graduates with the most expensive tuition, yes?

Not exactly. That study we talked about above noted that while community college borrowers carried the least amount of debt, they had the hardest time paying it back; 49% of them called it “difficult or very difficult.” Combined with the fact that community college grads had a lower employment rate than their private and public institution counterparts by almost 20%, this presents a disturbing reality: the graduates less likely to make a good salary are also the ones most likely to borrow amounts they’ll have trouble repaying.

Considering that our community college system is the third largest in the nation and enrolls almost a million students, that seems like a dangerous trend.

And in turn, that reality affects the whole middle class. Student debt burden is widening the class divide. College-educated young adult households without student debt make seven times more than indebted households, and they continue to make more as they age, because indebted households are also more likely to carry credit card or other debt and to declare bankruptcy. They also tend to have lower credit scores, so they can’t borrow as much.2

In other words, the more student debt we have, the more the middle class will continue to get kicked in the pants. Swell.

What Do We Do?

There are a lot of ideas floating around about how to deal with student loan debt, like legislatures stepping in to decrease state school tuition. (That issue can be a complicated one, though — see the recent debate about it in the NC state legislature.) Employers could also help out as part of compensation packages.

But one simple fix we know around here is lowering healthcare costs. It would be easier to repay your student loans if you weren’t paying so darn much for healthcare. That’s why we oppose legislative increases to healthcare (otherwise known as mandates).

Let’s work together to get North Carolina’s young adults back on track financially. These are complicated issues, but we can tackle them, one solution at a time.

Help us do it. Add your name and join the North Carolina Coalition for Fiscal Health to get updates on what YOU can do to help decrease healthcare costs in North Carolina.