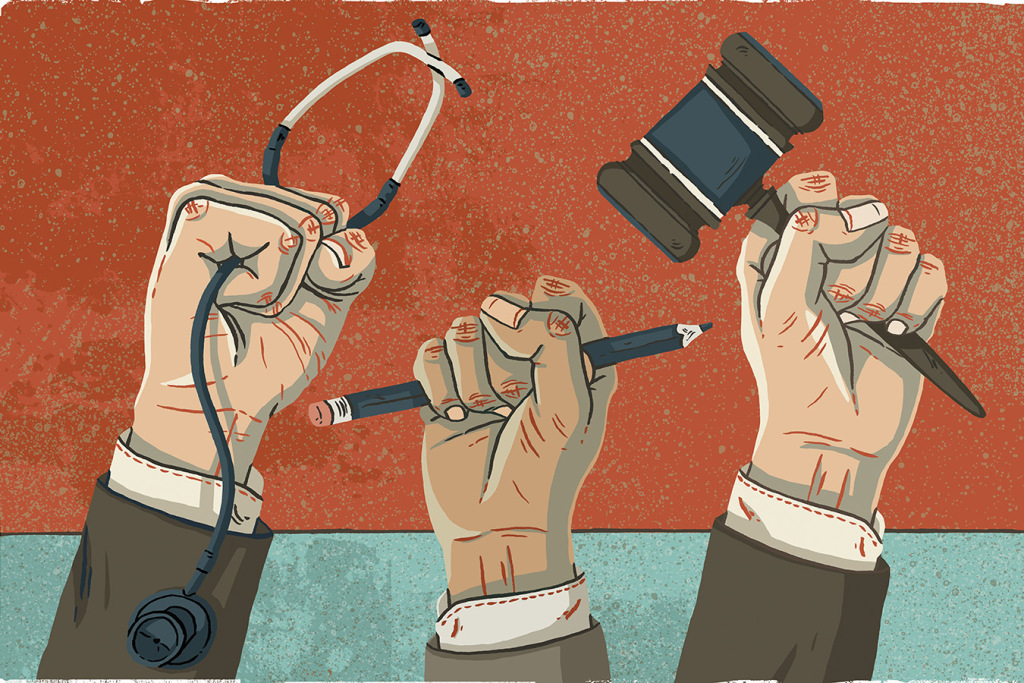 Joaquin Lopez had emergency gallbladder surgery after rushing to an ER last year. He has been haggling with Baptist Memorial Hospital in Memphis over what he owes ever since.

The 37-year-old college professor was hit with a nearly $8,000 bill from the out-of-network hospital — that was after the $11,000 he and his insurer had already paid.

Consumers are increasingly vulnerable to such so-called balance bills, which represent the difference between what insurers pay and hospitals’ list prices. List prices can be several times higher than what they accept from Medicare or in-network insurers.

Congress is considering bipartisan legislation to limit balance billing. But some legal scholars say that patients should already be protected against some of the highest, surprise charges under long-standing conventions of contract law.

That’s because contract law rests on the centuries-old concept of “mutual assent,” in which both sides agree to a price before services are rendered, said Barak Richman, a law professor at Duke University.

Thus, many states require, and consumers expect, written estimates for a range of services before the work is done — whether by mechanics and plumbers or lawyers and financial planners.

But patients rarely know upfront how much their medical care will cost, and hospitals generally provide little or no information.

While consumers are obligated to pay something, the question is how much? Hospitals generally bill out-of-network care at list prices, their highest charges.

Without an explicit price upfront, contract law would require medical providers to charge only “average or market prices,” Richman said.

In several recent cases, for example in New York and Colorado, courts have stepped in to mediate cases where a patient received a big balance bill from an out-of-network provider. They ordered hospitals to accept amounts far closer to what they agree to from in-network private insurers or Medicare.

“This is the amount they are legally entitled to collect,” said Richman.

Lopez’s bill came after he sought help at the emergency room following excruciating abdominal pain. Sent home with pain medication, he awoke hours later to a phone call from the hospital: Come back! A review of his tests showed he needed surgery. He didn’t stop to ask if the hospital was in his network, or for a cost estimate.

So, in an example like that, is there mutual assent?

Hospitals say yes, that signed admission forms, which include a promise to pay, constitute mutual assent, even if there was no price disclosed.

No, counters Richman. If a tax preparer provided no upfront estimate, he could not suddenly bill a client for $10,000 if the going rate for the service was $1,000 or less. The higher fee would never hold up in court of law, since there was no “mutual assent” about price.

Based on the hospital’s list prices, Lopez’s bill came to nearly $21,000. Insurer Cigna, using a formula it said is similar to what Medicare uses, said the maximum it would cover was $11,160. It paid 80 percent of that lower amount, and Lopez paid the remainder. Baptist hospital is billing Lopez for nearly $8,000 more, saying it wants the full charges.

“I’m an economist,” said Lopez, who teaches at the University of Memphis. “I understand how abusive these practices are. There is not a single market price.”

Indeed. Healthcare Bluebook, a consumer website that uses claims data to estimate costs , shows gall bladder surgery in Memphis costs as little as $14,000, but could be tens of thousands more, with a “fair price” of about $18,000 — which is generally less than full billed charges, but more than in-network insurers would pay.

That complexity — and the cost of hiring an attorney — have made legal challenges to medical bills on the basis of contract law relatively scarce.

Also, “it’s not a well-settled area of the law,” said Hall.

Even though hospitals have lost some cases, their arguments have also found traction.

The Virginia Supreme Court last year ruled in favor of a hospital, saying admission paperwork patient Glenn Dennis signed in the emergency room was a valid contract. The hospital had sued him over an $84,000 bill for his out-of-network care.

Still, the court left open the key question of just how much of that Dennis owed, sending that back to a lower court. That court previously ruled that Dennis owed only about $500 on top of the $27,255 his health insurer had paid. That reflected a discount the hospital commonly gave uninsured patients, the circuit court judge wrote. The two sides are still working on a settlement.

For those caught up in the disputes, determining a fair price is hard.

One way is to look at what hospitals accept for in-network care from private insurers. But hospitals generally object to releasing that, saying it’s a trade secret.

A 2017 Texas Supreme Court ruling has, at least for now, broken through this position. It said that hospitals in some legal disputes must disclose those in-network rates they allow in-network insurers to pay.

“Hospitals are really trying to prevent this sort of thing because they are uncomfortable having someone ask them to justify [their charges],” said George Nation, a law professor at Lehigh University in Pennsylvania, who filed a court brief in the Texas case on behalf of the patient’s argument.

In June, the hospital involved in the dispute asked for a rehearing, saying such disclosure would weaken its bargaining power. Several other hospitals are backing its request, illustrating the broad concern.

Lopez has hired a lawyer to fight his bill.

Consumers in some states might have legal backup under balance-billing laws. But rules vary, often don’t apply to all types of insurance and may cover only emergency medical treatment costs.

Tennessee’s law, which went into effect in July, requires hospitals to notify patients of estimated costs and that they could receive balance bills.

After getting a balance bill, consumers should attempt to negotiate a reduced amount, said Wendy Netter Epstein, a health law professor at DePaul University College of Law. Online lookup tools like Healthcare Bluebook or Fair Health can provide estimates of average costs for procedures.

Lopez said he offered to pay 20 percent of the disputed amount, but it has not — so far — been accepted.

Baptist Memorial Hospital encourages patients to file appeals and, if a better offer is made by the insurer, “we accept it and dismiss the patient’s balance,” said David Elliott, vice president of managed care and CEO of Baptist Health Services Group, in an emailed statement.

Lopez has appealed twice to insurer Cigna to cover more of the bill —without success.

For now, his lawyer has written to the hospital, disputing that Lopez owes more than was already paid by the insurer. The letter said Lopez planned to avail himself of any protection under state or federal law.

This content was originally published on Kaiser Health News on 12/19/2018.