The Epidemic, Up Close and Personal: NC Has the Worst Opioid Problem in the Country 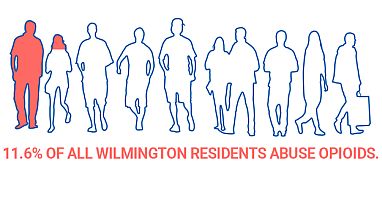 We reported a few weeks ago on Wilmington’s new status as the #1 opioid-abusing city in the United States. According to a recent study, 11.6% of Wilmington’s population has a problem with these drugs. Think about your ten best friends: if you lived in Wilmington, then statistically at least one of them would be in real trouble right now.

Three other NC cities made the top-25 list, actually: Hickory at 5th, Jacksonville at 12th and Fayetteville at 18th.

This isn’t a list we want to make at all, much less four times. So what’s going on?

To draw you a picture, here’s how the study results relate to Wilmington and to New Hanover County in general:

22 of the worst-abusing 25 cities are in the rural South. Wilmington is a small city, and New Hanover County is rural — just like 80% of the rest of NC. We’re right in the eye of the opioid storm.

People in low average per capita income areas are twice as likely to abuse opioids. Guess what that income level is in New Hanover County? Just $29,000. The study defines low-income as...get this…$40,000 per capita. Let that sink in.

People with a behavioral health diagnosis are three times as likely to abuse opioids. And the number of people reporting poor mental health in a given month in New Hanover County more than doubled1 between 2006 and 2010.

This isn’t a silent epidemic. In a 2011 community health assessment, residents clearly said that drug and alcohol abuse were huge concerns for them.2 But what to do about it? Many people feel utterly helpless in the face of addiction on a personal level. Imagine how it feels to face it head-on at a regional level.

But the study authors have some suggestions there, too — suggestions that interest us particularly at NCCFH. Suggestions about what businesses can do.

First, they say that employers need to know the data about opioid abuse.

Then they say to use that data to guide employees toward better utilization of their healthcare plans. To help them find benefits that will allow them to, say, try physical therapy before trying surgery, or give them mental health treatment options for their depression or anxiety.

Hear, hear, amen and preach. And we’ll add our own spin to that conclusion: to use your healthcare benefits, you first must have them at all. You must be able to afford them.

Fiscal health isn’t just about people’s bank accounts. It’s about saving their lives. Our entire state is at risk in one of the worst health epidemics our country has ever faced. The solution is complicated, but we’ll do our part: advocating for healthcare that North Carolina citizens can actually afford.

If you need help with opioid abuse, reach out. Try 1-800-662-HELP (4357) or find help locally with the Substance Abuse and Mental Health Services Administration. Someone will answer you, without judgment and with compassion, 24/7/365.