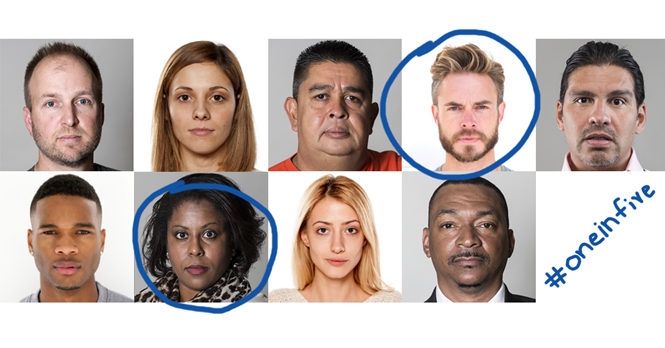 We have a growing mental health problem in our country. 43.8 million American adults experienced a diagnosable mental illness in 2013 — nearly 1 in 5 of us. Give yourself a minute to understand that number: one in five. And diagnoses of mental health are climbing. The number of people so disabled by mental disorders that they qualify for disability income grew almost two and a half times between 1987 and 2007.

The problem is in our offices, neighborhoods, and around our dinner tables. More than a million adults face mental illness in North Carolina every year, and as we’ve reported before, Wilmington has one of the biggest opioid abuse problems in the country. Our kids aren’t spared, either. In 2012-2013, almost 10% of adolescents in North Carolina had experienced a major depressive episode. That’s up from 7.4% just three years earlier.

The Hidden Cost of Suffering

That’s a lot of suffering — and it’s also a lot of money. We’re talking billions, here, for businesses of all sizes. In 2008, the National Institute of Health (NIHM) estimated that major mental health problems cost $193 billion in lost earnings and productivity annually, nationwide. And Psychology Today reports that companies of 500 or fewer employees lose millions every year due to depression alone. Small companies just can’t afford losses of that size.

And let’s not forget the cost of substance abuse. There’s a strong correlation between mental health issues and substance abuse or addiction; roughly a fifth of people experiencing mental illness also experience substance abuse. Substance abuse costs US employers $81 billion a year, according to the American Association of Occupational Health Nurses. In North Carolina alone, substance abuse robbed our economy of more than $12.4 billion dollars in 2004.

As shocking as these numbers are, they’re not even the whole story. They ignore the costs that are harder to quantify, like stress on employers and co-workers and the impact on children and families.

Why is this problem getting progressively worse? In part because treatment seems really expensive. It can be hard for governments or companies to decide to devote funds to mental healthcare. But the paradox is that mental healthcare becomes more and more expensive when you devote fewer resources to it — an ounce of prevention is worth a pound of cure. Untreated mental illness is costlier for employers than treatment, according to the Journal of Occupational and Environmental Medicine.

What Can We Do?

As a community, North Carolina needs to prioritize quality mental healthcare. We’ve made recent strides — this year alone we’ve poured money into increasing the services available to rural communities, for example. However, there’s much more work to be done.

We could, for instance, work to decrease the strain on our healthcare system across the board so there would be more capacity to treat the millions of Americans who need mental healthcare. We could stop legally requiring insurance companies to pay for things that very few North Carolinians choose, like pastoral counseling, so there would be more room to pay for things that very many North Carolinians need, like beds in mental health facilities.

It’s time to get to work, for the sake of both our mental health and our fiscal health.

Part of the strain on our healthcare system are bills called mandates, and it’s our mission to stop them. We want to work for the good of every North Carolinian’s fiscal health — and mental health, too. Join us.