To Expand, or Not to Expand: The Pros and Cons of Medicaid Expansion in NC 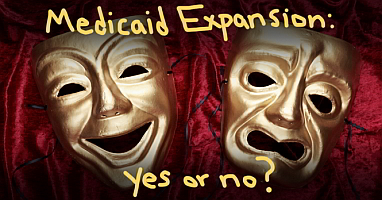 Medicaid expansion is a serious topic, and people are passionate about it. We hear a lot about it in the news, but do we fully understand what it means — or what each side of the expansion debate believes?

We’re here to explain some of the points supporting each argument, so you can decide on the issue for yourselves. First, though, a little history:

Pro: $2 billion in additional federal funding would channel into our state every single year. Also, between gains in Medicaid revenue and reductions in uncompensated care, we’d spare our state budget $318 million between 2016 and 2020. These extra funds could have a deep and broad impact on the state economy by improving employment, wages and capital.

Con: Sure, that funding would come in, but expansion would still cost an estimated $600 million dollars each year starting in 2020. That’s a full 2% of our 2016 $22.3 billion budget that we don’t have. Also, will the federal government keep its word about that $2 billion in funding? After all, they’ve moved goalposts. Who’s to say they won’t move this one?

Pro: Jackson Hewitt found that not expanding coverage leaves NC businesses vulnerable to tax penalties — millions and millions of dollars’ worth. The reason? Low-income workers who would have been eligible for Medicaid and aren’t covered under an employer-sponsored insurance plan will now have to buy their own insurance. But...follow us, here...each of those workers can offset his or her premium by claiming a tax credit that will trigger an additional $2,000 penalty for his or her employer.

Con: Expansion would require individual tax increases. See the aforementioned cost argument; at nearly $600 million dollars each year out of our $22.3 billion budget, expansion would eat up nearly 2% of the current budget as a recurring expense, even with the federal government paying 90% of the cost of expansion. How are we going to pay that? In taxes, which then won’t go to desperately-needed changes like teacher salary increases.

Coverage for the Poor

Pros: Approximately 500,000 low-income people would get healthcare coverage, the vast majority of whom have no other options for insurance. In addition to being profoundly important ethically, this is a fiscal issue; if we don’t offer those people insurance, we are paying the full price of the emergency room trips they’re forced to make because they don’t have primary care doctors. And speaking of those emergency room trips: states that didn’t expand Medicaid, including North Carolina, are seeing more rural hospital closures. This limits poor people’s access to care even more.

Cons: North Carolina has a shortage of primary care doctors, especially in poor rural areas, and expanding coverage will make it worse. Here’s why: Medicaid cut the rates they pay doctors by up to 20% in 2014. So if they accept Medicaid patients, doctors have to see more patients a day (lowering patient satisfaction) or lose money. Because of that many doctors are unwilling to see Medicaid patients, especially in rural areas — and if they do, they could be forced to move out of remote areas and consolidate with large hospitals to save costs. That means that poor rural patients will have less access to care, not more, because they have fewer local doctors. Medicaid simply can’t force doctors to live and practice in rural areas.

Pros: Expansion saves lives. Research published in the New England Journal of Medicine looked at multiple states and found that “state Medicaid expansions to cover low-income adults were significantly associated with reduced mortality as well as improved coverage, access to care, and self-reported health.” In other words, low-income folks died less and got healthier. In fact, opting out of the Medicaid expansion may cost the lives of up to 1,145 North Carolinians a year.

Cons: These life-saving outcomes would only happen if low-income folks had access to the doctors they need to become healthier. In some states, Medicaid expansion produces these outcomes, because those states don’t have a growing population of Medicaid recipients. We do. In fact, NC is one of the fastest growing states in the US. That means poor people could actually have less access to care under expansion — see our points above about health coverage for the poor.

These are just some of the arguments for and against expansion. We encourage you to do your own research — some of the links in this article are a good start — and come to your own conclusions. But any way you slice it, one thing is definitely true: healthcare in North Carolina just plain costs too much. That’s why we’re working to reduce the number of mandates in North Carolina.

Want to join the cause? Sign up for our emails. We’ll give you updates on the healthcare legislation that affects YOUR fiscal health.