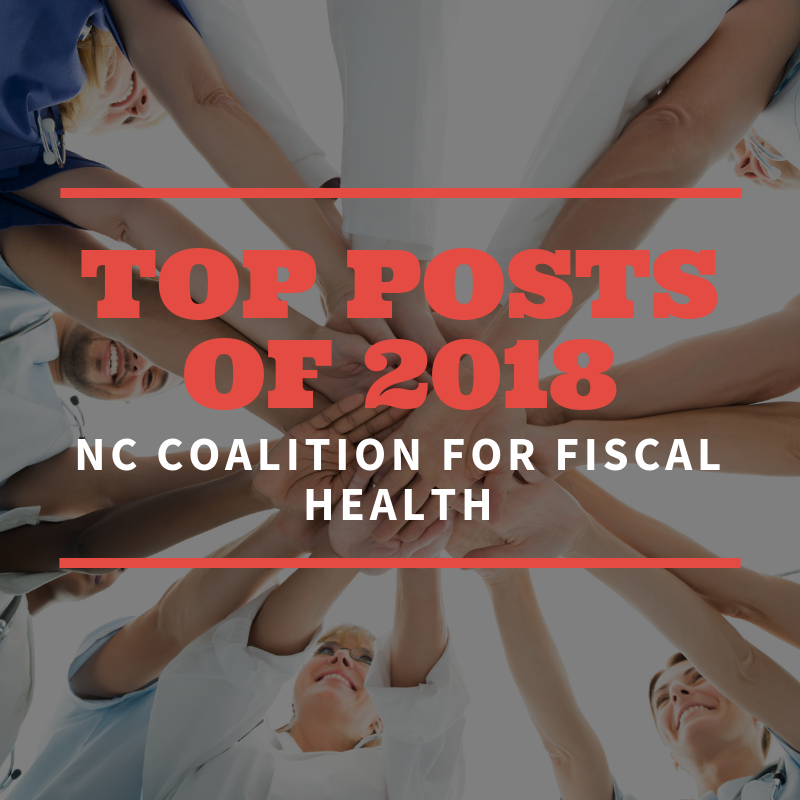 As we ring in 2019, we’re so excited to continue our mission of shining a light on rising healthcare costs in North Carolina and are thrilled to have you joining us on that journey. But before we completely turn the page on last year, we wanted to reflect on the milestones and significant stories that were important to our cause in 2018.

In an homage to the traditional New Year’s countdown, we’ve put together a quick list of the top 10 stories on the NCCFH blog and shared it below. If you haven’t had a chance to read these yet, give them a shot and share your favorites with your friends.

Starting off our countdown…

No. 10: We saw continued discussions about two major mergers between hospital systems in North Carolina. UNC Health Care and Carolinas Health System decided to marry (their word, not ours), with ECU and Vidant also combining efforts. Our story in March offered up gentle suggestions for those who feared they may lose their jobs as a result.

No. 9: Back in September, we talked to successful IT entrepreneur, Keith Buchanan, for the NCCFH podcast. Like many of his fellow North Carolinians, this Marion, North Carolina native found it hard to pay the rising premiums of health insurance for himself and his wife. Hear Keith in his own words talk about the decision to forego health insurance because of the cost.

No. 8: Did you know one out of every five trips to the ER includes a treatment by an out-of-network doctor? You did if you read this piece on surprise bills.

No. 7: Remember those hospital mergers we talked about in no. 10? Turns out things would go on to get a little bit messy, and we wrote about how even UNC isn’t sure the merger is a good idea. Will the merger appear again on this list? Read on to find out...

No. 6: It was just about this time last year that we wrote about the norovirus outbreak at North Carolina State University that spread throughout the rest of the state. According to reports, the virus spread from Raleigh to Charlotte and even as far as Beaufort County in South Carolina. We gave our readers tips on how to prevent the norovirus and what you should do if you happen to catch it.

No. 5: Something tells us you knew those hospital mergers would appear on this list again—and, well, you’re right. When UNC Health Care and Carolinas HealthCare announced their “marriage,” they claimed the partnership would allow them to negotiate better deals with vendors. We examined this claim in this post.

No. 4: Our second podcast addition to the list includes our talk with Lorenda Overman of Overman Farms. The Goldsboro, North Carolina-based farm produces corn, wheat, and soybeans, and is home to nearly 8,000 pigs. Unfortunately, the Overman family story is not unlike that of farmers across North Carolina in that healthcare costs are hurting their businesses. These rising rates are one of the greatest challenges to independent farms staying solvent, and hard-working North Carolinians like the Overmans are the ones suffering.

No. 3: Surprise, surprise! Here’s our second mention of surprise bills on the top 10 list. Melissa Bailey of Kaiser Health News, looked at how ambulances transporting patients in emergency situations are resulting in astronomical surprise bills. Bailey writes about one patient with a $3,660 bill for a 4-mile ride and another marooned at an out-of-network hospital, where she’d been taken by ambulance without her consent.

No. 2: The month of April included a bombshell post out of Winston-Salem, North Carolina. We covered news of the lab errors at Wake Forest Baptist University Medical Center related to the hospital’s pathology testing that led to both misdiagnosis and missed diagnosis for cancer. And we touched on some of the downstream ramifications of those errors, including a potential exit from the hospital by Medicare.

And that brings us to the top spot of our 2018 list. Drum roll, please.

No. 1: We wrote an impassioned post about value-based reimbursement potentially coming to North Carolina, and the impact it would have on lowering healthcare costs. Also known as “payer/provider risk sharing” or “pay for performance,” the concept incentivizes quality in healthcare over quantity—which means it could end unnecessary office visits and over-testing for the sake of financial incentives. Knowing the importance of this topic, we even included a delicious metaphor using Bojangles chicken sandwiches and sauce to make sure that all North Carolinians really got the gist.

Less than two months after the original post, we broke the news that the General Assembly chose to override a veto and allow Value-Based Reimbursement. As we said that day, NCCFH is thankful to the General Assembly and the NC Department of Insurance for enabling innovation in North Carolina and helping to lower healthcare costs.