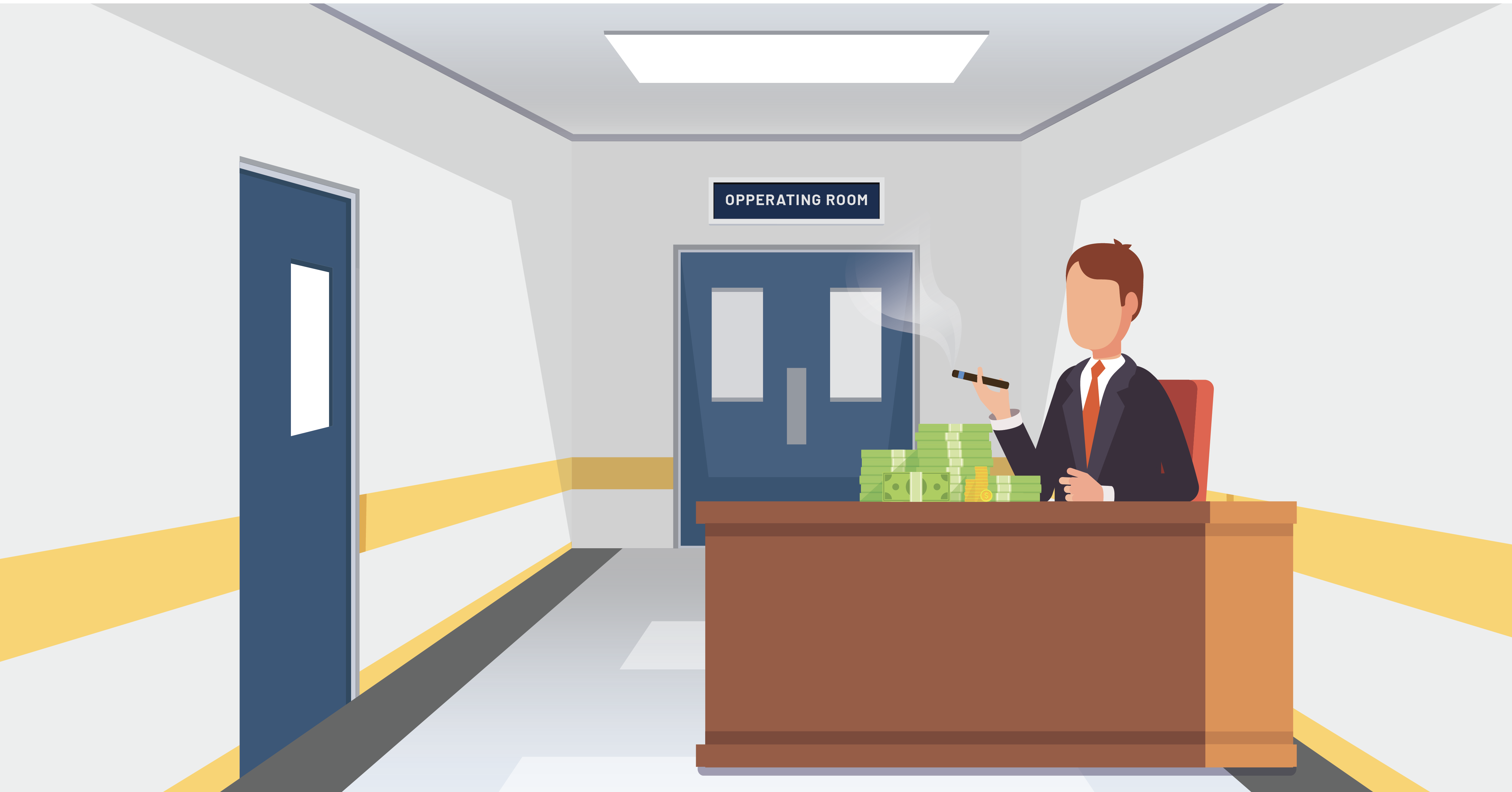 But private equity is also the driving force behind of one of our nation’s biggest health and economic problems: surprise medical billing.

What is “surprise billing?”

We’ve all heard the term, but what exactly is surprise medical billing?

Basically, the term refers to a situation where a patient are treated at an in-network hospital by a doctor who is out-of-network, and is then billed a surprise amount of out-of-network care.

For example, you go to an in-network emergency room, but the ER doctor who treats you isn’t in network. Or, you are getting surgery at an in-network hospital and the anesthesiologist isn’t in your insurance network.

You’ll still get a bill from your in-network hospital, which will be covered according to your insurance plan. But then – surprise – you will get a second, and often much larger bill, from the out-of-network doctor.

The question most people ask now is “How can my doctor be out-of-network if I was at an in-network hospital?”

This is where private equity come in.

Hospitals sometimes “outsource” a number of their services such as emergency care and anesthesiology.

Essentially, this means they contract with large national staffing firms who employee thousands of ER doctors or anesthesiologist. Those staffing firms then place their doctors into your local hospital.

Who owns these doctor staffing companies?

A report released in July by the US Department of Health and Human Services (HHS), found that “private equity plays a large role in third party staffing.”

In fact, the report notes that the country’s two biggest staffing firms – Envision/EmCare and TeamHealth – are each owned by major Wall Street private equity firms.

Once private equity takes over these staffing firms, their goal is to deliver maximum profits to their investors.

In order to achieve this, they often do one of two things: raise costs and deliberately keep their doctors out-of-network with insurers so they can send you surprise bills with no limits on the amount; or, use the threat of going out of network and sending surprise bills to extort larger payments from insurers. This, of course, means bigger premiums from you.

Let’s look at what the research says about the two biggest firms, Envision/EmCare and TeamHealth.

According to a 2019 report by Yale University:

“After EmCare took over the management of emergency services at hospitals with previously low out of-network rates, they raised out-of-network rates by over 81 percentage points. In addition, the firm raised its charges by 96 percent relative to the charges billed by the physician groups they succeeded.”

Not only did the out-of-network rates skyrocket when EmCare took over the emergency room staffing, they also nearly doubled the amount patients where charged. That means, and much larger, surprise bills.

TeamHealth uses a different but equally disturbing tactic. According to the Yale report, TeamHealth uses the “threat of out-of-network billing to secure higher in-network payments.”

Unlike EmCare who goes out-of-network and raises prices, TeamHealth threatens to go out of network to extort higher payments from insurers, which are then passed on to patients through larger premiums.

What’s in this for private equity firms? Massive profits.

Surprise medical billing drives up health care costs by roughly $40 billion a year. This, as Arnold Ventures puts it, means “everyone’s health care premiums — for both employers and patients — are higher, even if one hasn’t received a surprise bill.”

Just how substantial is this problem?

Private equity’s surprise medical billing scheme is an enormous problem for families across North Carolina and the country.

A poll by the Kaiser Family Foundation found that 1 in ten Americans were victims of a surprise medical bill received from an out-of-network provider.

At this rate, the Institute of Economic Thinking says “the estimated percent of hospital visits resulting in a surprise bill” will soon be half.

It is no coincidence that the rise in surprise billing is directly connected to private equity firms buying physician staffing groups.

In addition to the two largest staffing firms being private equity owned, a report from last year found that almost 65 percent of U.S. hospitals now have emergency rooms that are staffed by outside companies.

If you want to know just how important preserving their surprise billing scheme is to private equity, look no further than the $60 million ad blitz they launched earlier this year.

Any guesses who funds “Doctor Patient Unity?” TeamHealth and Envision/EmCare.

Surprise medical billing is one of the biggest health and economic issues facing North Carolina today.

Medical bills are the leading cause of family bankruptcy. Premiums are up for people everywhere. And everyone is one accident away from a surprise medical bill that could cost them their home and life savings.

This is happening because large Wall Street investment firms are perpetrating a deliberate scheme to maximize their profits through surprise medical billing.

The good news is that this is a problem that can be solved with commonsense, consumer protection reforms.

Other states have enacted solutions that are protecting patients and their families.

North Carolina needs to be the next state to step up.