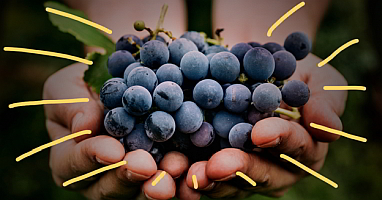 Admit it: you just love wine. You’re the type who never believed it when they said it was bad for you and popped a celebratory cork when you read that a glass of red a day helps your heart. (For the record, we’re not taking sides. We’ll leave that to the doctors.)

Some even call you a wine snob, though you think you just like nice things. When you go pick out that cabernet, what label are you looking for? Chile? California? France?

What if you could have something just as excellent and support our state’s economy while you were at it?

Thanks to the resurgence of the North Carolina wine industry, you can.

Fun fact: North Carolina used to lead the nation in wine production. Crazy, right? But then Prohibition happened. Winemaking disappeared in our state for most of a century.

Suddenly, we’re back to our roots! (No, really. Roots? Get it?) In the past fifteen years, the number of wineries in North Carolina has grown four times over. More than just the vines are flourishing — the economies of these areas are getting a bump from the industry, too. As NC citizens it would do us well to encourage them.

Wineries flourish in the foothills west of Winston-Salem, in the Yadkin Valley. They’re clustered so closely there that many companies sell package deals: you can make a day of it and tour multiple wineries at once, being chauffeured and taking in some fresh mountain air while you’re at it. But grapes flourish all over the state, including down east. There’s even Martin Vineyard and Orchard, in Knotts Island, just about as far north and east as you can go without falling into the ocean (or into Virginia).

Why is North Carolina so great for winemaking? Our soil. Grapes can thrive in a number of soil types, but they particularly love our sandy loam. It helps them drain well and retain warmth.

Most vineyards in North Carolina grow viniferous grapes — the kind that grow in bunches. They’re the ones you usually see in grocery stores. But some wineries grow a North Carolina treasure: muscadine wine. The muscadine is a native North Carolina grape that’s been cultivated for hundreds of years. Our first recording of it is in 1584! Duplin Winery in Rose Hill, the oldest winery in the South, even makes a wine they claim is from that very first vine.

Muscadines make a super-sweet wine that some folks like for dessert — and some just like, period. Next time you’re visiting relatives out of state, take some along for a little taste of NC. It’s a great hostess gift!

So the next time you head to the grocery store for a bottle, look to see whether they have a local North Carolina section. Many will. It will do our state good!

While you’re at it, do yourself some good: sign up for our legislative updates about policies that affect your fiscal health.