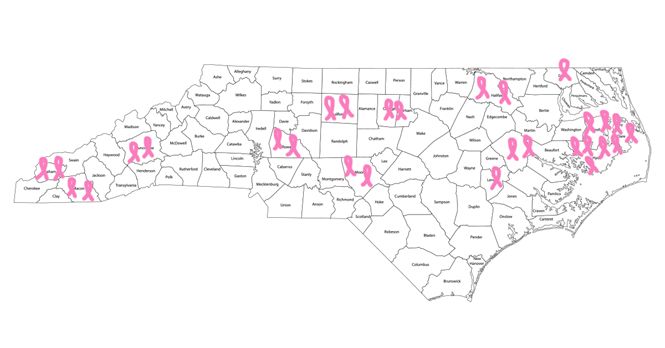 It’s no surprise that cancer rates vary by state, for all sorts of reasons. But as it turns out, they can vary within a state, too.

Cancer has been the number one cause of death in NC since 2009, so it gets a lot scrutiny — and recently, researchers have discovered cancer “hot spots” in NC that are a growing public health concern. Experts are scrambling to find the reasons and causes for these geographic clusters of high cancer rates, which include rare types of leukemia and also more well-known cancers, like breast cancer.

We’ve known for a while that the rate of breast cancer varies widely from county to county in North Carolina. Some counties have rates that are nearly twice that of others. (Tyrrell for instance, has the highest rate in the state, and it’s more than double Bladen’s.) The common wisdom goes that these variations have to do with things like poverty level, but this new research shows otherwise.

Annie Marie Meyer, an epidemiology researcher at UNC, says that “when we look at breast, cervical and colon cancer, even after we control for race and poor insurance coverage, we still see inequalities that are potentially geographic in nature.” In other words, people in certain parts of North Carolina — the northeast, for instance — seem to get diagnosed more than others. And no one knows quite why.

Some projections indicate that there will be more than 10,000 new cases of breast cancer in NC in 2016, with approximately 1,400 deaths from the disease, so getting a handle on where these new cases are happening and why is really important.

The good news is that communities and organizations around North Carolina are coming together to raise awareness about the disease and the need to fund further research. The Susan G Komen Foundation is active and visible throughout the state, organizing numerous events in support of breast cancer awareness and research. Other kinds of support is evident in communities statewide, and some of it — like pink police badges, for instance — can be both powerful and incredibly touching.

There’s a lot we don’t know about breast cancer, particularly breast cancer in North Carolina. As Meyer and other researchers say, it’s a complicated disease. But there’s a big push to find answers, and it’s bringing a lot of people together.

To keep up with more news and legislation that affects YOUR health and your health dollars, join us.