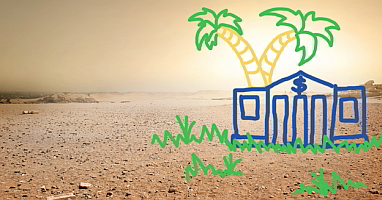 Financial deserts, or bank deserts, are low-income city neighborhoods or poor rural areas where residents live far away from any mainstream financial institution at all. Places where people can’t get to banks...and so just don’t.

There’s a problematic irony to financial deserts: they happen in poor neighborhoods, because the banks can’t get enough customers. But then those neighborhoods become even poorer, because not having a bank account actually costs you money.

Think about it. Without a bank account, you don’t earn interest on your savings. You pay high fees to wire transfer money through alternative services like Western Union. And you don’t build credit — you don’t have access to bank credit or debit cards, and credit cards you do qualify for likely charge a bundle. No credit means that to get a loan you have to utilize services like alternative lending services, who charge much higher interest rates because of the higher risk of lending.

A shocking number of people are “unbanked” or underbanked” in this country — almost 20%. Most of those people live in financial deserts, and many of them are minorities, particularly black and Hispanic people. Paying more to do less with their money further disenfranchises these already-underserved populations. Clayola Brown, president of the A. Phillips Randolph Institute, puts it well: capital that in different circumstances would stay in a community to bolster local businesses, support schools and build civic engagement “bleeds out...and leaves little left over to nourish families and propel upward mobility.” Financial deserts conspire to keep people poor.

In fact, the whole state economy is affected, via both individuals and small businesses. A 2005 study found that loan rates increase with the distance between the business and the bank. As larger businesses are usually located in population centers, this problem disproportionately affects small businesses — a real issue, since they are 99.7% of the employers in our state. Small businesses drive investment, entrepreneurship. When they struggle, so does our economy.

There’s more bad news. While financial deserts have been evolving among minority and low-income communities since the federal deregulation in the ‘90’s, they’re getting worse. Banks as a collective have closed nearly 5,000 branches since the financial crisis. Where are those branches likely closing? That’s right — in areas with fewer customers, like rural areas with low population density.

North Carolina ranks high on the financial deserts list. We have 38 in rural areas. The problem’s been growing for some time: in 2005, we had 133 FDIC-insured institutions in the state. We’ve lost 34 of them since.

Technology offers some short-term fixes to financial deserts. Mobile banking helps: once people make the trip to get started at a brick-and-mortar bank, they don’t have to go in much if they have access to a smartphone. Fintech (financial technology, if you’re not in the know, which we weren’t) solutions may also provide exciting opportunities. But this still doesn’t attack the problem of small business loans, or households’ access to more diverse financial instruments.

We need more innovative solutions. Companies like Self-Help Credit Union, which dedicates 90% of its services to low-income families or people of color, are a great start. There’s micro-lending, the practice of making very small loans with good interest rates to people who normally would not qualify, which seems to definitely stabilize and possibly improve poverty situations. Then there’s Texas. They passed legislation in 2015 to create “banking districts” — underbanked areas in which banks could set up shop for perks, like tax benefits and below-market deposit rates. We’ve got our fingers crossed.

What Does It Mean to You?

Nothing, maybe. You may have a bank. You have some hope that if we get things like healthcare worked out, your children will do better than you. They may even achieve the American Dream.

But in a nation where we champion personal responsibility, the right to rise through hard work, we must also look at real factors that hold people back or make progress difficult. Those factors must be part of the national conversation on poverty and wellness.

In “The Crack-Up,” F. Scott Fitzgerald said, “The test of a first rate intelligence is the ability to hold two opposed ideas in the mind at the same time, and still retain the ability to function.” It is absolutely true that personal responsibility is a cornerstone of American society, and people need to be smart with their money. But it is equally true, and true at the same time, that some things need fixing for our grand democratic experiment to work — for all of us.

Want to find out more about North Carolina financial and health news that affects YOUR fiscal health? Sign up for our newsletter and receive regular policy updates!