You’re Shipping Me! — FedEx, UPS and an Evolving Economy 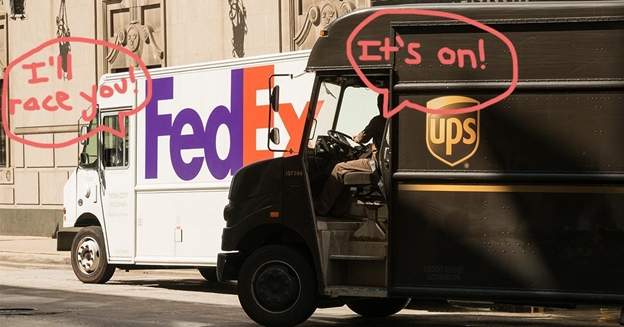 Last summer we discussed the gig economy —what it is (working several part-time or freelance jobs), who is taking advantage of it (everyone), and how it’s impacting employees (like how some aren’t getting health insurance coverage). [Random fun fact: the "gig" in gig economy is all about cooler-than-you musicians.]

When more than 40% of workers in America are “contingent” — something other than traditional, full-time employees — it’s clear that this evolution isn’t a trend. It’s more of a shift. In fact, Intuit projects that contingent workers will account for 40 percent of the American workforce by 2020. (Whoa.) To bring it home, the N.C. Justice Center determined that from 2009-2013 temporary work grew in the state by 52 percent.

The Purple Polo Guys vs. the Famous Brown Shorts

As it turns out, the pros and cons of the gig economy become clear when you think about all those Christmas packages you got a few months ago. Specifically, how they get delivered.

We’re talking about FedEx and UPS. Both companies manage enterprises within the parcel delivery industry, but they operate on different business models. FedEx hires independent contractors. UPS employs traditional workers. You may have heard less-than-great things about the way FedEx does business and the gig economy in general, but not so fast; the new American workforce has its advantages, too.

So what makes a guy or gal want to work for FedEx vs. UPS?

Other than being known for keeping Tom Hanks company on his island in Cast Away, FedEx packages are also known for being delivered through a contractor model. FedEx offers two independent contracting options: Custom Critical and Ground. (In contrast, Freight and Express drivers are full-time FedEx employees with benefits.) Custom Critical and Ground each employs contracted small businesses whose vehicle simply bears the FedEx name. This means they own and operate under the FedEx brand, but are not full-time employees of the FedEx Corporation. They’re part of the gig economy.

The United Parcel Service manages an employee-based operation with more than 444,000 employees worldwide. Full-time, unionized employees start with a base salary of roughly $39,000 annually with regular raises and great benefits.

What Color Will You Wear?

Sometimes the gig economy gets a bad rap, but there are pros and cons to each system, and certainly advantages to the FedEx model. FedEx workers are taking advantage of the “new school” gig economy, while UPS employees are sticking to a traditional business model that’s been around for ages. Neither business model is perfect, and change is inevitable in this fast-moving digital era.

We think that no worker should have to worry about taking a sick day or paying for a doctor’s visit. Whether your company provides health insurance or you go into the marketplace on your own, your healthcare should be affordable and accessible. If you agree, join us.