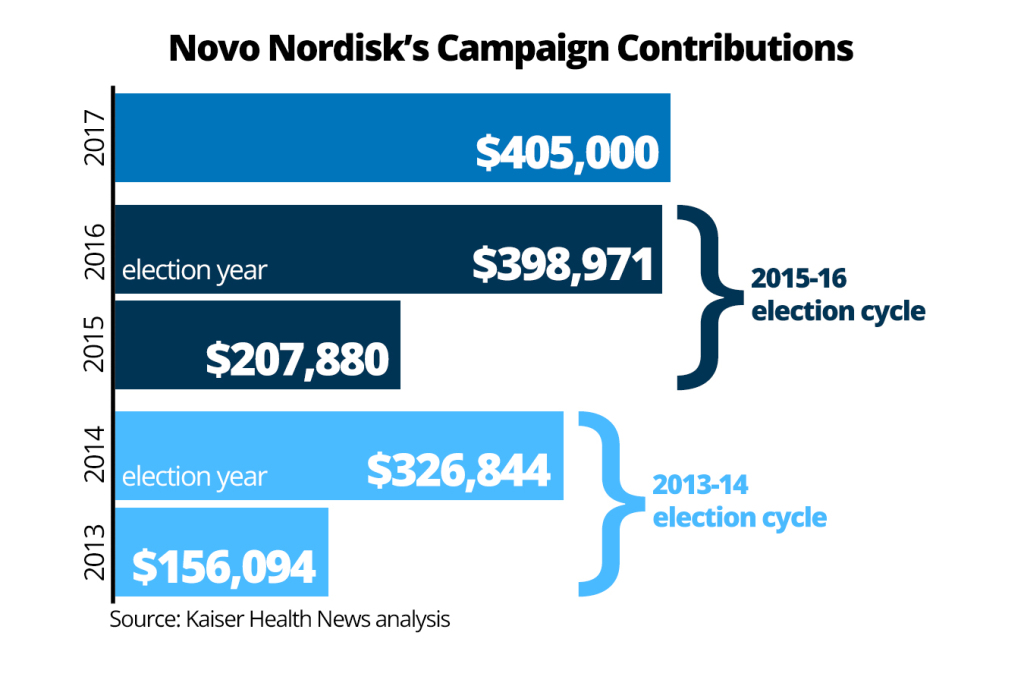 Business looked challenging for Novo Nordisk at the end of 2016. As pressure mounted over the pharma giant’s soaring insulin prices, investors drove its stock down by a third on fears that policymakers would take action, limit prices and hurt profits.

Then things got worse. A Massachusetts law firm sued the company and two other pharma firms on behalf of patients, claiming that high insulin prices of hundreds of dollars a month forced diabetics to starve themselves to minimize their blood sugar while skimping on doses. At least five states began investigating insulin makers and their business partners.

As scrutiny rose, Novo Nordisk engaged in what analysts say is a time-honored response to public criticism. It aggressively ratcheted up spending to spread its influence in Washington and to have a louder say in the debates over drug prices.

The drugmaker’s political action committee spent $405,000 on federal campaign donations and other political outlays last year, more than in 2016 — an election year — and nearly double its allocation for 2015, data compiled by Kaiser Health News show.

“We remain committed to being part of the discussion,” said Tricia Brooks, head of government relations and public affairs for Novo Nordisk, acknowledging scrutiny over insulin prices but saying the company has many other issues to work on with policymakers. “I don’t want us to run away from it and hide or keep our head down and wait for it to roll over.”

Novo Nordisk also spent $3.2 million lobbying Congress and federal agencies in 2017, its biggest-ever investment in directly influencing U.S. policymakers, according to the Center for Responsive Politics.

Part of that surge included summoning more than 400 Novo Nordisk employees to contact lawmakers and their staffs on Capitol Hill, “a huge increase from anything we’ve ever done before,” Brooks said.

Taken together, the increases represent a “major corporate policy shift” for the company and appear to be a classic business response to growing political risk, said Kent Cooper, a former Federal Election Commission official who has tracked political money for decades.

The pharma industry as a whole has behaved similarly, cranking up political contributions and lobbying. Meanwhile, despite much talk about change, Congress and the Trump administration have done little to control drug prices or threaten drug-company profits.

Pharma businesses overall made political donations of $12.1 million last year, down from a $13.6 million election-year surge in 2016 but 9 percent higher than the haul for 2015, according to the KHN analysis. Pharma industry lobbying expenses surpassed $171 million last year, the highest level since 2009, during negotiations over the Affordable Care Act, according to CRP.

“It’s been hot in the health care arena for — how many years now?” said Steven Billet, who teaches lobbying and PAC management at George Washington University. “Anybody in this world now is sitting there thinking, “When I go back to the board next year, I’m going to ask for 15 percent more in my [lobbying and campaign finance] budget. Because this isn’t going away.’”

Like most big corporations, Novo Nordisk runs a political action committee, or PAC, which solicits employee donations and gives the proceeds to political candidates’ campaigns. The company is Danish. Only workers who are U.S. citizens or permanent residents are allowed to support the PAC.

Like many PACs, Novo Nordisk spreads money to both parties, concentrating on powerful committee members and other leaders. Since 2013 it has given $22,500 to House Speaker Paul Ryan, a Republican, and $20,472 to South Carolina’s James Clyburn, a member of the Democratic House leadership.

The firm’s influence-seeking has grown along with its U.S. sales, which went from hundreds of millions of dollars in the early 2000s to some $9 billion last year. Its biggest business is diabetes, including various types of insulin whose list prices have more than doubled in recent years.

The wholesale list price for a vial of Novo Nordisk’s Levemir, a long-acting insulin, went from $144.80 in 2012 to $335.70 in January, when the price rose 4 percent, according to Connecture, a research firm.

Even Alex Azar, a former Eli Lilly executive who became Health and Human Services secretary in January, said in his confirmation hearing that “insulin prices are high, and they’re too high.” Along with Novo Nordisk and Sanofi, Lilly is one of the three big insulin makers under investigation by state attorneys general for price increases that seem suspiciously similar in size and timing.

But potential insulin price limits threaten Novo Nordisk more than those companies because diabetes-related drugs account for an exceptionally big portion of its business, analysts said. Several proposals under consideration by Congress could lower insulin prices or limit future increases.

One would allow the Medicare program for seniors to negotiate prices for covered drugs, thus lowering the cost.

Other proposals would make it easier for competing, “biosimilar” alternatives to break through the thicket of patents created by sellers of complex drugs such as insulin. Others would bring more transparency, requiring companies to publish and justify price increases.

None of the proposals has made it out of congressional committees. In the face of inaction by Washington, Novo Nordisk’s stock has recovered much of the ground it lost in 2016.

Novo Nordisk rejects suggestions that it coordinated price increases with competitors. So do Sanofi and Lilly.

Even including discounts, however, the company’s net profit margin for 2017 was 34 percent, its highest since at least 2000, when it was half that high.

Official filings show Novo Nordisk lobbyists have been weighing in on numerous measures related to drug prices, including proposals to import less expensive drugs from Canada.

The company lobbies Washington on a wide range of issues including diabetes prevention, budget matters, chronic disease and making obesity an accepted medical disease that insurers will pay to prevent, Brooks said.

“I’m not surprised,” he said. “They’ve obviously had some issues recently. This is maybe a predictable enough element in their strategy.”

KHN’s coverage of prescription drug development, costs and pricing is supported by the Laura and John Arnold Foundation.